Work with Determination Because Others Need You To

I recently ran in a half-marathon as a fundraiser for Camp Barnabas*, a summer camp for special-needs campers.

There are so many things I love about running, but perhaps the greatest is participating in athletic events that include participants who may be running their first organized race along with those who are world-class performers.

As I was coming up on the 9-mile marker of this recent race, I started to pass a young man. As I got alongside him, he removed one of his ear buds and said, "You are making this look too easy." Iassured him to not let looks be deceiving.

We chatted a bit. It was clear he was starting to struggle and was looking for a distraction. I asked what brought him to the run. He said it was his way of helping the campers who needed a little help. I asked him if he had ever run this distance before and he shared that although he had been a distance runner in high school, he had never run more than 10 miles (which meant he had to run 3.1 miles further than he had ever run before).

As we crossed the 10-mile marker, I commented to him that in his position, this was my favorite part of a run. He asked what I meant, and I explained that every step he took from here on was a new distance record for him. He seemed to enjoy the perspective.

He told me he needed to slow down a bit, and he would see me at the finish line. I didn't really take him literally, but took it as his determination to finish.

Sure enough, as I was helping myself to a little post-race sandwich, I felt a tap on my shoulder. As I turned to see who it was, I was met with his hand raised for a high five and a big smile on his face. All he said was, "I did it!"

Yes he did. And, in doing so, gave us all a lesson we need to take into the new challenges we must to commit to in our businesses.

And, even if for some reason he hadn't gotten to the finish line, he would have still outperformed everyone who was sitting at home on their couch that morning.

*Camp Barnabas is a very special camp that provides very special opportunities and memories for very special campers. Learn a little more about them by watching their video and, if you are so moved, I know they would appreciate any donation you feel like making. 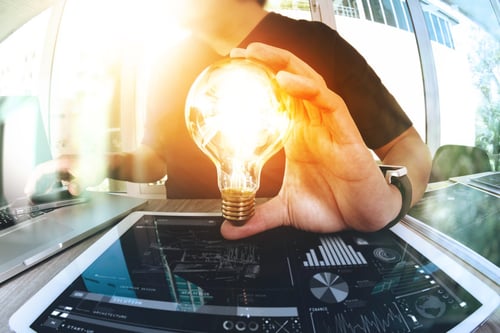 The Death of Traditional Selling and How Brokers Are Accepting It

How to Connect with Clients in More Meaningful Ways