For many years I have been an avid runner. It is an integral part of most days for me. It is a great stress reliever and many of my best ideas come during a run. While I am very consistent with my running, I don’t always decide where I’m going to run until I get to the end of the driveway. However, regardless of what distance or route I run, I tend to come back through the same few blocks for an uphill finish along side the post office.

My favorite time of day to get in a run is first thing in the morning. I’m not exactly sure when I first really noticed him (a couple of years ago at least), but most mornings there is a postal worker sitting there, on the uphill finish, in his pickup truck finishing his morning coffee before starting his shift. At first, we would make occasional eye contact and give that “hello nod” of the head without ever breaking stride.

Over the course of a few runs, his head nods turned to him giving me a thumbs up as I passed. Then, one morning he rolled down his window and yelled some words of encouragement. I don’t recall what the words were, I’m not even sure I knew at the time, but I know I appreciated the encouragement at the end of, and during the most difficult part of, my run. That’s the extent of our acquaintance. We’ve never really spoken and, to be honest, I’m not sure I would even recognize him if I were in line next to him at Starbucks, but I still felt the connection.

I haven’t had many morning runs over the past several months, so I haven’t seen my friend in the truck for quite some time. But today, I did get in a morning run. Funny, until today, I never really thought about the influence his encouragement has had on me. This morning I had already pushed myself hard, and with very warm temperatures and high humidity, I was actually tempted to avoid the uphill finish, but I didn’t. I was so focused on my finish that I didn’t even see the familiar little pickup truck until I got to the base of the hill and, without even making a conscious decision, I reached deep down and pushed myself up that hill as hard as I could run. I didn’t even know if my “friend” was in the truck to see the effort, but I was motivated to work as hard as I could, just in case.

He was there in his truck, gave me a nod of the head and a thumbs up. Somehow, that made the extra effort worthwhile. Afterwards, I actually thought it a little strange how motivated I was, and how hard I was willing to work, to please someone I don’t even know. And I didn’t even know if he was there. After thinking a little longer, I decided it wasn’t strange at all. I realized I was doing it because he had made the effort to demonstrate his appreciation for my effort. I felt I owed it him to return the favor by working hard.

Then I wondered, for whom are we the “guy in the truck” without ever knowing it? Or better yet, for whom can we become the guy in the truck by just making the effort to give a few words of encouragement or the occasional thumbs up?

A couple of takeaways for me

First, even if from a relative stranger, knowing someone else appreciates your efforts causes you to work harder and makes the effort more rewarding. Secondly, effective recognition can be something as simple and spontaneous as rolling down the window and giving a little yell or even a quiet thumbs up can speak volumes when done at the right time.

Where have you found your stealth motivation? Who around you would be energized if you took the time to give them a thumbs up? 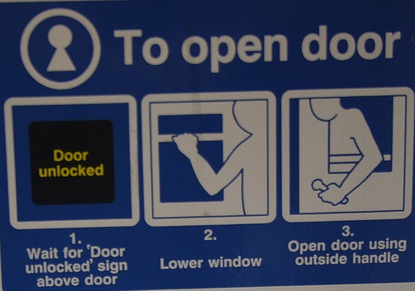 The Game has Changed, the Doors are Open - It’s Time to Just Connect with People

Need to Make a Change? 3 Steps from Indecision to Implementation